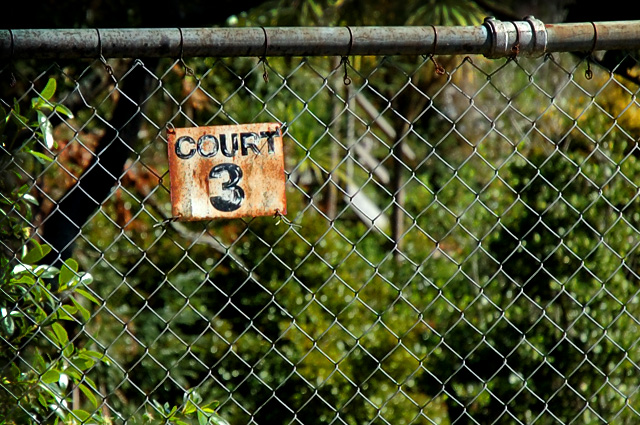 Yesterday on my photo hunting misson I found myself in Remuera, so decided to go check out Meadowbank Primary School. I parked the car on Ngapuhi Road across the road from the house that we used to walk to after school until the useless dick picked us up. I walked down through the right of way, where the steps were still uncomfortable too wide to take in a single step, over to Kelvin road.

The junior school has had a huge amount of money spent on it. There is still the main block that was built in the 1920s there, but it's been surrounded with modern classrooms and landscaping as you would expect in Remuera. The 1920's style Murder Room was still there and still just as scary.

I wandered over to the senior school, down over the bridge and through the bush. The bottom court still looked exactly the same, it even sounded the same, with the same little sign on the chain link fence (above). The bank where Lawrence and I played was still there although all the trees had gone. The spot where we played marbles was there. But not a single classroom was the same as when I was last there 30 years ago. Every single one has been ripped out and replaced with new modern stuff. The playing field looked much smaller that I remember, but it was nice to go wander out on it and remember the games we played there.

It was all most nostalgic.

For old times sake I took a drive down Debron Ave to see number 9. The scene of a lot of unhappy memories. Although there was a couple of good ones including Debbie Holmes from next door. I couldn't believe it, but they have built a house on the front lawn, and another on the back lawn. The place looks completely different. Instead of a bright yellow Torana SLR on the driveway, there was a BMW 318. And just as incredibly, the people that lived on the corner 30 years ago are still living there today. Their house is still a pig sty with the garage overflowing with junk, and a dead Land Crab (also known as an Austin Maxi) slowly rotting on the front lawn. The place looks exactly the same now as it did 30 years ago.