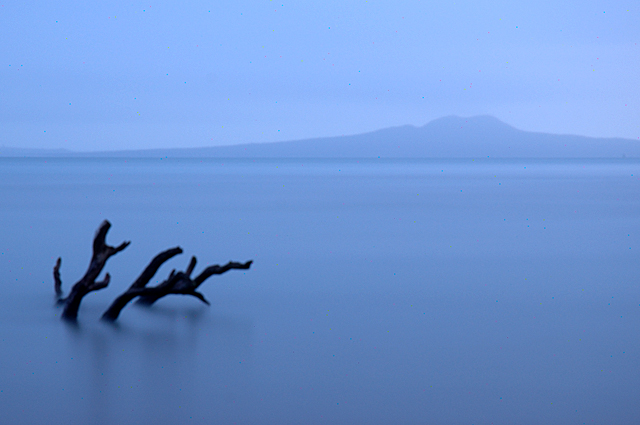 Last night after Gabba and I got into bed and turned the light out, (I bet you are wondering where I'm going with this huh?), a Morepork started calling somewhere outside in the valley below us.

I made Gabba get out of bed and open the window so that we could hear him better. I think listening to a Morepork while snuggled up in bed is one of life's truly great experiences. Especially if they are close by. Their call is loud and spooky and lonely and rare enough to make it really special.

If you want to hear what the little buggers sound like, there is a Morepork mp3 here.

For the third time this week I was back out taking photos. This photo was the first one I took tonight. It was kind of the throw away shot to gauge the light for how long the exposure needed to be and at what f stop, given I was shooting fully manual. Unfortunately the following shots were all crap and I liked this one best anyway. It's Rangitoto (again) along with a log poking out of the water just before high tide at the north end of Long Bay. Click the map button below to see where I was or if you want to get the same photo yourself.