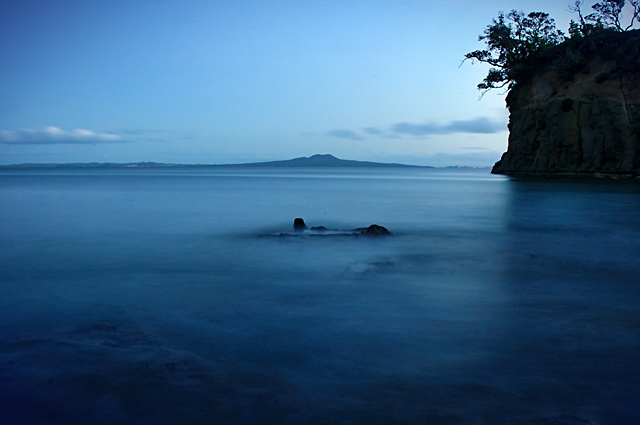 Prior apologies to some of the geeks at the office, to whom I regaled this story earlier today.

Last night, I was down at the beach taking some photos at sunset of The Tor on Waiake Beach. Click the map link below to see where I was.

I was standing on the rocks almost visible in the above photo. The tide was a little further out so they were mostly above water. I stood and watched the waves for a bit to check I wasn't going to get wet and then set the tripod down. It didn't have it's legs extended so I was crouching down framing my shot through the view finder.

Out of the corner of my eye I saw a much larger wave approaching from which I knew was going to completely cover the rock I was standing on. I quickly stood up and jumped the 2 steps back onto the dry rocks and higher ground, only to realize I'd left the camera sitting on it's tripod, which now had about 4 or 6 inches of the Pacific Ocean swirling around it.

It was at this point that I let out quite a girly squeak. I'm not afraid to admit it. I couldn't decide if the camera was going to be safe where it was or if I should get my shoes wet going back in after it. Ultimately while trying to decide what to do, I did completely nothing. Everything turned out ok though.

Tonight I went back to the same spot. It was a little darker and the tide was in a little further. It's The Tor again with Rangitoto Island in the background. Only 600 years ago, Rangitoto was a nice little volcano.

The photo was processed with Sting's The Dream of the Blue Turtles playing in the background. It was posted with Firefox, the first time that has ever happened. I was wearing a blue shirt and had a tumbler of Laphroaig and a pair of wire cutters at my side. And this is my current favorite photoblog, just in case you were wondering.