This time I take a bodyguard 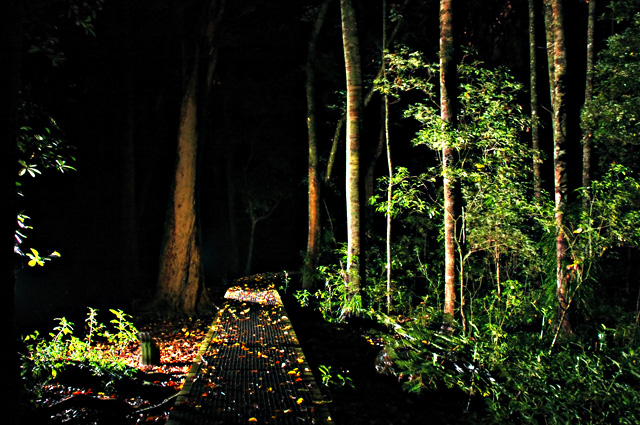 If I thought I was a chicken before, it's just been proven to me now. Another trip to Smith's Bush tonight, only this time I took a big bear of a man (Rik) with me to keep the spooks at bay. After a day of rain and wind though, there wasn't a bird to be heard. No rustling in the bushes, no bugs, no spooky noises. Even the trees were quiet.

Never mind, at least I had an assistant to carry some gear and to operate the flash in the bushes.

Bloody hell photography is a frustrating hobby but. I knew exactly what I wanted in my mind, I just can't seem to get it to appear in the image on the monitor. I'll persevere with this idea a bit longer as I think it has legs. Perhaps I'm just in the wrong location.

It's Rik being a bad bugger by breaking the rules and stepping off the board walk to pop the flash into the trees. Although as he rightly points out, it's his city taxes paying for the bush, so he'll step into it if he pleases. Otherwise, this forms part of my "playing with the flash" series which started last night.

Posted with the scotch and accompanied by Strawpeople and Headless Chickens (I'm a sucker for Fiona McDonald).