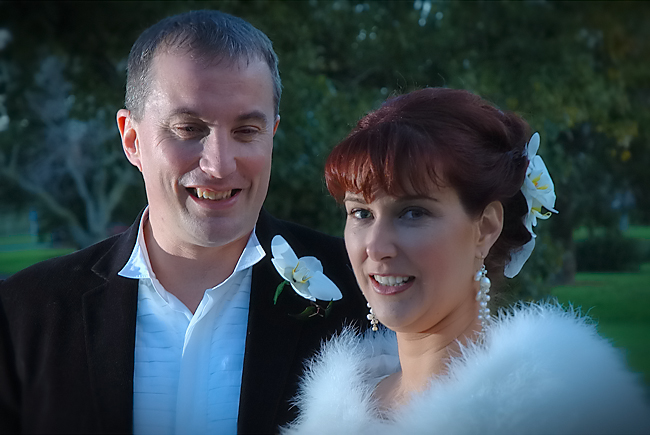 The last wedding I photographed, as commissioned by the wife (which means it doesnt count), was a complete fricken disaster. Admittedly the utterly boring predicatable nature of the wedding made things bad, but my complete ineptitudeness didn't help much either.

Today though I spent 3 hours studying and preparing before the shoot. I looked at thousands of wedding photos on Flickr hoping to get some tips. I reread hundreds of posts on Strobist for off camera flash. I went to the supermarket (shudder) to buy batteries. And I subjected Gabba and Sarah to 30 minutes of test shots to make sure I had some hope of getting at least one photo with a useful exposure. Part way through this studying I called Rik to ask about the "official wedding photographer" only to find there wasn't one and I was it. OH SHIT!

So we arrive at the location for a 4:00pm start. Already the sun was very low with nasty deep shadows and bright spots causing issues with lost highlights.

One end of me was grinning at the absurdness of it all and the other end, (my sphincter), was clenching like a crazy thing ;-)

So anyway, after 100 photos, some posing and way too much smiling, it was basically dark and I had a card full of photos.

On the way home, after the pressure to perform had worn off, I thought of all the things I should have done but didn't. Dammit!

On looking at the photos, I'm pleased that at least 10% of them are mostly good enough. Not a bad hit rate at all. I'd love to go back and reshoot it now that I've learned a thing or 20.

John and Viki, thanks for letting me take some photos, I know what you look like now! It was a beautiful ceremony. I hope you like the photos.

Half the photos I used the speedlight on the camera and half I got brave and took it off. I'm glad I did as those photos with the light off the camera look so much better. While this one isn't necessarily the best, it's the first I processed.

My thanks also to Rik for being my (semi) intelligent light stand.