What happens if you break the person you are photographing? 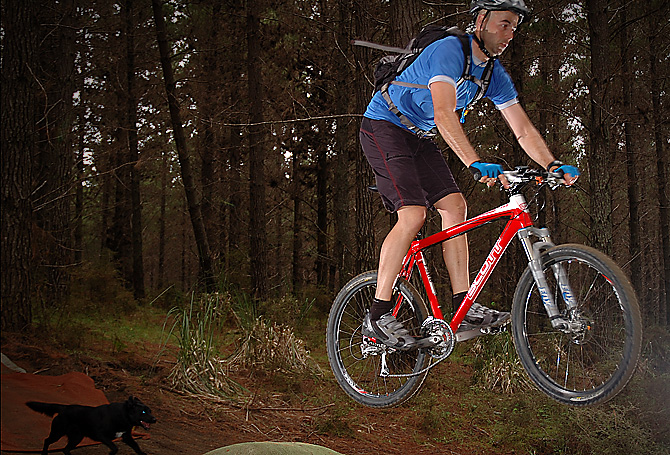 Last week I sent this email out to everyone at the office...


If anyone is mountain biking at Woodhill in the near future, I'd like to tag along to get some action photos.

Or if you know someone that goes out there and doesn't mind having a camera and some strobes pointed at them, that'd be useful too.

All photos will be supplied CC of course.

Greg let me know he might be going out and so we agreed to meet at 11:00am Sunday.

I told him I wanted huge action shots. But he told me he wasn't that brave and that I'd need someone else. I was vaguely disappointed, but thought I could learn something about exposure and timing and flash placement anyway, before I found that person that had the stones to get some air.

Greg rode off up the trail and I got a couple of photos. Then we wandered up the track some while he found a better spot. Again, 2 more shots and then we tried further up the track. We found a great spot with a cool looking jump. He told me he was happy to give it a whirl as he'd done it before, no problem.

I set up my voice activated light stands (the giblets) and waited for Greg to come down the track.

Above is the admittedly pretty average photo I got of him over the bigger jump.

Below is the result not 2 seconds later. Bruises and buckled wheel. I got 5 photos and Greg got broken. I learned some things about shooting action in the dark in the forest and where and where not to put the strobes. And I learned that I feel very guilty when the model falls down and hurts themselves.

For my own benefit, there was 3 flashes involved. An SB800 off to the camera right. An SB26 camera left and the on camera flash. The off camera flashes were set to 1/4 power, the on camera, full power which is too much. I think the off camera strobes need to be moved back from the subject some. A brighter day would help too to get the shutter speed up a smidge.

Thanks to Greg for allowing me to take some photos and for being so patient and helpful. Apologies to Greg for breaking his bike. I'm not that keen on finding anyone that is braver now, just in case I feel worse about breaking them too.
Post Meta