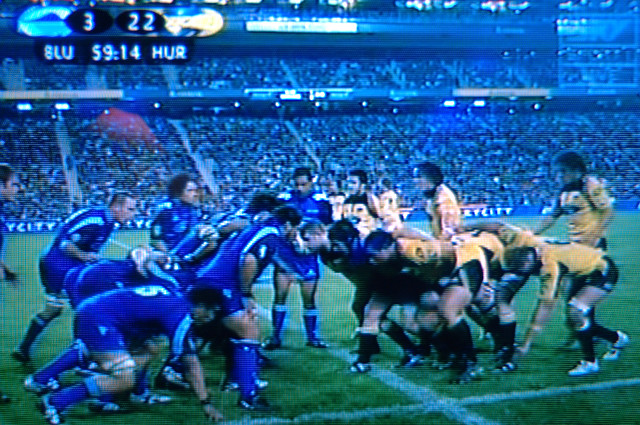 Sarah went to her first game of rugby last night. Thankfully I didn't have to take her. Dave Haines took her to a Blues Hurricanes game at Eden Park. She saw Tana and the cheerleaders and she saw her arm waving on the big screen twice. She had a hot dog and fries and a whole bag of lollies and then caught the train home, but it broke down so they had to catch another one. I'm not sure what she thought of the game though as there was all those other exciting things to report.

Gabba, Ali and I did a bit of charity work and took a poor family out for dinner to the Seaside Indian Restaurant across the road from the office. I had had a useful amount of wine to drink and was coming up with blog ideas for Africa. I was writing them down on a scrap of paper, which I left in the restuarant when we left. Dammit. Now I can't think of a single one other than Indian food is a RIP OFF. In our Chicken Tikka Marsala, there was only 5 little bits of chicken. I bet a chicken goes a long way in India. The food was very good though, and it all only cost $60 for the 6 of us.

Oh, and then we came home and I photographed the TV which is much harder than you might think after 5 glasses of wine and 3 beers.