Symond Street Cemeteries without Gabba and the Giblets 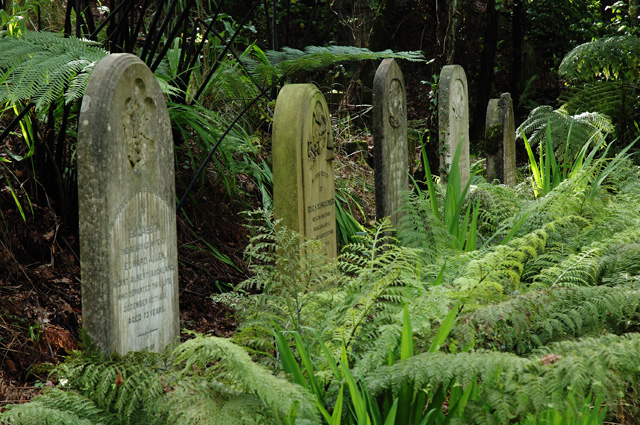 I went for a wander through the Symond Street Cemeteries today. I must have driven by them hundreds of times but never actually explored them. Let me tell you though it's worth finding a place to park your car in the God forsaken spot of Auckland and having a wander. Do it in daylight though as I suspect it's a little dangerous after dark with the aerosol cans laying about and evidence of glue sniffers everywhere. I felt a little uncomfortable walking around on my own. There is a nice history here, but I can summarize in a few sentences if you don't have the time.

The cemetery was opened in the 1840's and closed in the mid 1880's, although blood relatives were allowed to be buried there up until sometime in the early 1900's. It's odd that all the graves are over 100 years old. there is no new graves. The newest I found was someone buried in 1930. The cemetery on the Grafton side is completely overgrown with a few paths and on the other side of Symonds Street, it's a liitle more "cemetery" like. Hundreds of graves were moved when the motorway went through in the 60's, but for the most part, everything is as it was back 100 years ago or more. The way people died back then was interesting too. There was plenty of old farts that must have expired from old age. But there was also someone that drowned at Waiwera (imagine the trip up to Waiwera back then), and lots of people that died from being thrown from their horse.

It occured to me that Gabba and the kids were really missing out on seeing this stuff. I can't take them all with me when I go making photo's as they get impatient when I spend 10 minutes getting the shot. But I've got to see some really interesting parts of Auckland in the last 6 weeks I have been making specific photo gathering missions. I guess Gabba and the giblets really are there though when they see the photo's, but it's not really the same. I need to figure a way that they can come and I can feel free to take the time I need.

The photo above isn't the best capture I got today, but it gives a feel for the overgrown nature of the cemetery.

UPDATE: I've just reread this post and it could hardly be considered to be well written huh? My apologies. I can't rewrite it now becasue I've had a Famous Grouse and now my typing and writing skills are under the influence.