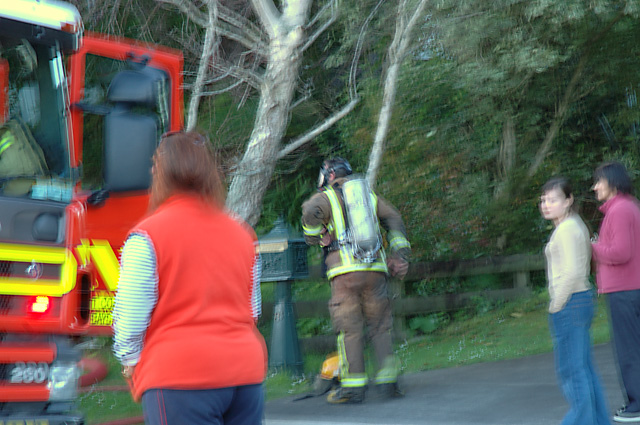 Gabba called me at the office tonight at about 5:30pm all breathless and excited telling me to come home quick, Robin's house (which is 5 doors up the road from us) was on fire. Gabba had lit the fire at home (because it was bloody cold) and she couldn't go out to see what was going on because our house might burn down. Despite the fact I was enjoying the job I was doing I jumped in the car and headed home. As I drove, I unpacked the camera, thinking I could get some great photo's and sell them photo journalist style to the NZ Herald for Paparazzi style figures. Then I could retire, Wahoo!

Anyway, back to reality. Our street was closed (although I drove through the cones) and there was people everywhere and 3 fire appliances and police and everything else with flashing lights. There was smoke and hoses and the whole 9 yards going on. I thought they didn't need me up the road so I just handed the camera to Gabba to go make us wealthy. But dagnabbit, I had forgotten to check the F Stop on the camera and it was still set to F10 from last night. Gabba didn't have a hope in hell in getting a shot in focus. Of course she doesn't know enough about the camera to fix that. So every shot was out of focus due to camera shake at 1/5th of a second or more. Even the photo of a dead Tui that must have died from smoke inhalation was out of focus and he wasn't even moving!

Robin is the lady up the road, who used to live next door to one of Gabba's numerous friends. Kind of a spoke friend. It seems a log rolled out of their fireplace and set the house ablaze. Thankfully everyone got out ok. I've never really been that close to a house fire before. I can't recall anyone I've ever known being in a house fire. Of course as soon as I say that Ma will correct me no doubt. I can't even begin to imagine what that would be like though. One of the kids was in her jammies, and they are not allowed back in the house. That right there is grim reality of the situation.

As these things are good for doing though, it got the kids talking about what to do in a fire and how they start and what it all means. Their little eyes were bugging out while we went through the escape routes and explaining they don't need to save their American Dolls and especially not to save the budgies. Everything seemed a whole lot more real this time compared to the last time we did that whole fire thing.

So above is a guest photographer who was handed a camera that wasn't ever going to allow her to get a decent shot. Sorry Gabba.