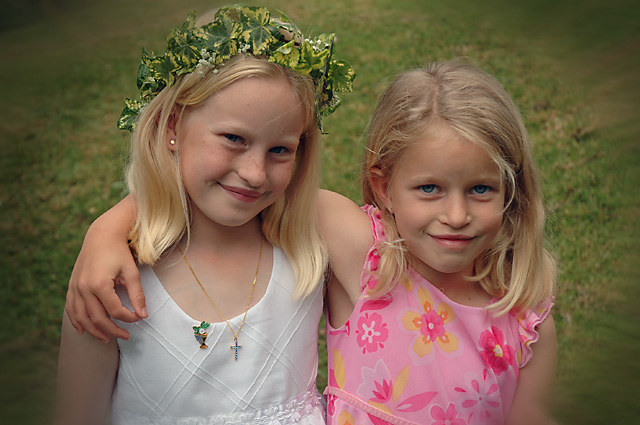 Sunday (yesterday) was Sarah's first holy communion. She's been going to lessons for weeks, and yesterday was the real thing. she's now officially part of God's club. Although I guess she already was a member from when she was baptised. So really I'm buggered if I know what yesterday was all about after all.

All I know was that I had to get up early on a Sunday, have a shave (which I hate doing on the weekend) get dressed up in my Sunday best and head off to church for a couple of hours. At church there was excessive amounts of ritual. Lots of bowing and kissing of things and kneeling in front of things. And that was just the 4 old guys up the front! As for us, there was lots of standing and sitting and singing (which I don't do unless I'm playing air guitar and that probably would have been inappropriate). Every time the head God-botherer said something, the crowd said it back to him. Although the chant thing the 4 old guys did was particularly cool.

Then came the big moment. Sarah got to go up the front and eat the bread and drink the wine. After all the build up for weeks and the gathering of family and the presents and the special white dress, it all seemed a little bit anticlimatic to me. She reported it tasted just like ordinary bread and the wine tasted like the wine we have at home.

The best part for me was the special dinner. Roast lamb and roast veggies and chocolate cake and ice cream etc.

Lots of gratuitous Potatoshop action on the photo to hide it's inadequacies.

For friends and family, there is more photos in the gallery.