Is she really going out with him? 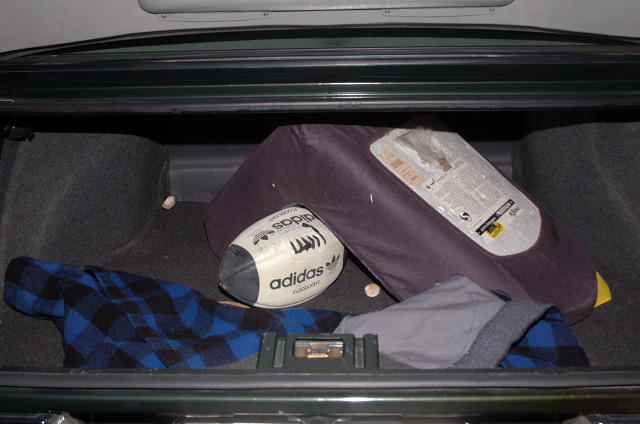 No (attempted) arty photo today, just photographic evidence that will go towards building my case in the future. I found a Swanndri and a deflated rugby ball in the boot (trunk) of Gabba's car tonight. I think Gabba is having an affair! I hope the prick hasn't driven my car yet.

Something else that I have been pondering on though. How many people are really interested in fashion/recipes/wine of the week/real estate? Why is it that more than half of the weekend (so-called) magazines that come with the newspapers are full of fashion clothing only your freak cousin on your wife's side would wear and a crap recipe involving artichoke hearts and a wine from an average vineyard owned by a wealthy fat dick and a Ponsonby Villa that looks like the owner exists in and doesn't actually live in. Surely it can't be only me thinks all that is bullshit?

And why do Zucchini's exist? They are much more pointless than Celery. And bugger me if there isn't 1.12 million pages on the internet (according to the Goog) about Zucchini. Ha, Celery beats Zucchini with 1.8 million pages, which possibly proves my point.

It was me that got Britney Spears pregnant, just in case you were wondering. Here's another question though. Am I the only person that immediately thinks of the person having sex as soon as I get told they are pregnant? I get an instant mental picture. I want to blurt out something really funny, but I normally just nod, wondering what the hell I should really say.

And Britney Spears beats Zucchini and Celery put together with 4.46 million pages on the internet. Take that Zucchini, in your face.