Bugger me with a blunt market vegetable, I'm stupid! 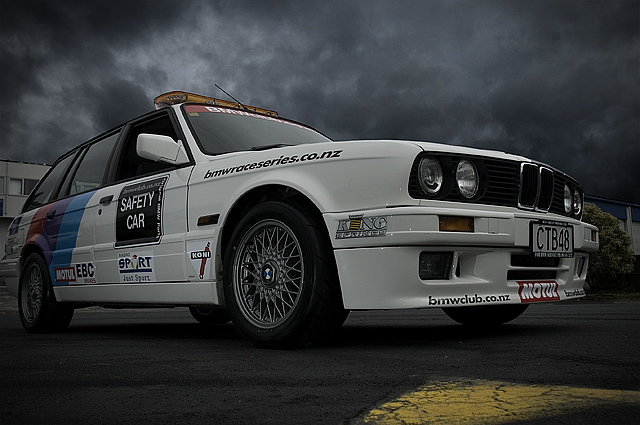 About 3 weeks ago, I had to go to a lawyer to get something witnessed. I arrived at the correct time and found the correct location. There was sod all parking available and what was there was in a bloody tight spot on a nasty slope. While negotiating the car into the small space, I made an error of judgment and hit the house with the front of the car.

I thought I had just touched the bumper gently, so softly in fact that I didn't even check the damage. But Gabba asked me a few nights later how I had dented the car so badly. I ran out to check on the car to find that I smooshed in the front guard (I'm buggered if I know what you Americans call that part of the car) chipped off a big bit of paint and left the pin stripe flapping.

Severe depression ensued. In fact I stressed over it for weeks following, even to the point of not sleeping. I'm still very distressed by it.

Well tonight I did something just as stupid.

Tonight the BMW Car club got to have a private session with the BMW Art Cars at the Auckland Museum. I looked at the camera on the floor a couple of times tossing up whether I should take it or not. In the end I decided it's the museum and photography will not be allowed. Then I reasoned that there was going to be a hundred other people there and that I'd not be able to get a useful shot.

Well bugger me with a blunt market vegetable, not 30 seconds after I arrived, the president of the car club come up to me to ask where my camera was so that he could take me up on my own to get some photos of the cars before everyone else arrived. Shit a fucken brick if that was the stupidest decision I'd made to not bring the camera since I decided not to use the hand brake while making my 3 point turn in the car 3 weeks ago.

It's the BMW car club safety car for the BMW Race Series. It's a poor replacement for one of the art cars which were spectacular by the way. I dunno if you have ever been near something truly magnificent, but tonight it was about as religious as I could possibly get.